MEANWHILE: ANOTHER MAJOR “DERRUMBE” IN OLD HAVANA, THIS TIME ALONG THE MALECÓN

At least one man was seriously injured on Thursday when two buildings
completely collapsed and part of a third also fell on Havana’s
Malecón. The buildings were semi-dilapidated, fenced with metal,
uninhabited, and at the time of the collapse they were being demolished by
construction workers.

The two buildings and the fragment of a third that collapsed are located
on what is officially called Maceo Avenue between Águila and Crespo streets,
very close to the Prado de La Habana. According to a nearby resident, “the
workers demolishing them were using a jackhammer when what was left of the
buildings fell down.”

“At least one man was seriously injured, because he was passing by on
the sidewalk and the metal fence gave way with the pieces that fell. Half of
his body was buried under the rubble and other people also suffered minor
injuries,” detailed the neighbor, who also added: “It was a danger even for the
cars passing on the street.”

“There wasn’t any
good signage telling people not to pass by,” a neighbor told this newspaper,
noting that “not only were the buildings collapsing, but there were electrical
cables on the sidewalk and every time I passed by I had to step off the
sidewalk, but this a street with fast-moving traffic and every time you step
off the sidewalk your life is at stake.”

“Everything around here is grim, the day will come when we will see the
entire Malecon collapse,” laments another neighbor. “They don’t fix things here,
they just paint them when an important visitor is coming, or tear them down to
build hotels,” he complained. “This demolition work should not have been done
without closing the block.”

“The east building has just collapsed right now, right here in front of
me,” a passerby reported through a live broadcast on the social network
Facebook, and who also recorded the moment when the injured man was taken from
the place in a vehicle heading to a hospital. “It fell on a man,” he
explained in the video.

The images show a group of people trying to rescue the injured man from
under the fragments of the building. “The debris reached to the other side of
the street,” explained the internet user in a transmission of slightly longer
than a minute.

The collapsed building is located in the municipality of Centro Habana,
one of the most populated in the capital and which for decades has been an area
characterized by the high presence of tenements, with infrastructure problems
and overcrowding. Many of the buildings are from the early twentieth
century and have not received repairs for more than fifty years, not even
painting on their facades.

In the vicinity of the Malecon, the buildings have suffered especially
the effects of the salt air which, together with the lack of maintenance, have
turned the housing stock in the area into one of the most damaged in the Cuban
capital. The successive programs launched by the Government have not resolved
the increasingly frequent collapses.

It has been three years since the Government acknowledged a deficit of
almost one million homes on the island, a very serious situation that it
aspired to alleviate in a period of ten years. However, the shortage of materials
due to a persistent crisis exacerbates a problem that continues to leave
millions of people in suspense, not knowing when they might see their roof
coming down.

According to a report from the Cuban Observatory for Human Rights last October, almost half of the homes in the country need repair, and 11% of families live in places at risk of collapse. 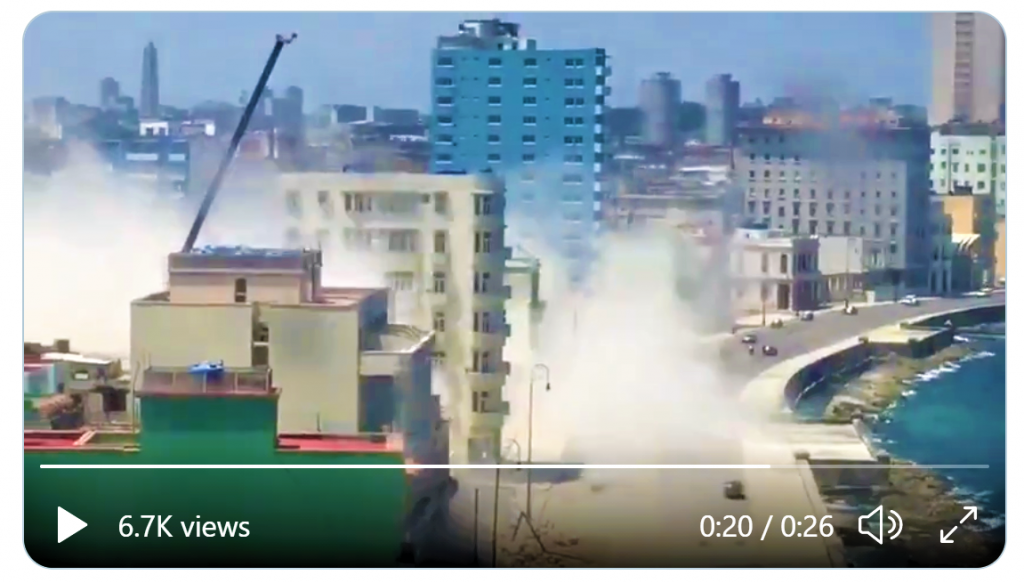