Protest in Cuba: SPREADING NONCONFORMITY IN THE AGE OF COVID AND SOCIAL MEDIA

People protest in solidarity with
dissident artists in Havana. – Reuters

Something
extraordinary is happening in Cuba these days — and I am not talking about the
absence of Canadians on its beaches.

Hundreds
of mostly young artists, independent journalists, and some academics, are
raising their voices against censorship. Some of them even call the regime for
what it is: a dictatorship.

Discontent
has been brewing in the island for some time, especially among young Cubans.
But the spark for this rapid escalation was a few arrests too many, as well as
the wider availability of social media over the past two years.

First,
there was the arrest and imprisonment of an irreverent rapper (Denis Solís) for
“disrespecting authority.” Solís is a member of a loose and mostly artist-based
collective named the San Isidro Movement. The “MSI” emerged in 2018, to protest
against new restrictions on freedom of expression.

Then,
Solís’ arrest, the video of which he made available on social media, prompted
some of his friends to go on hunger strike in the MSI headquarters, demanding
his release and calling peers to join them in protest. It was their turn to be
detained, by police in civilian clothes, who illegally broke into their
apartment for the alleged misconduct of violating the COVID-19 testing
protocol. The websites they were using to call for action were blocked by the
government — so much for the public health concern — but, apparently, too late:
digital nonconformity was already spreading wide in the community.

Arbitrary
arrests are common in Cuba: There were close to 2,000 cases in the first eight
months of last year. But this time, a straw broke the camel’s back. On Nov. 27,
up to 300 mostly young Cubans turned up in front of the ministry of culture,
calling for the release of Solís, greater freedom of expression, and …
dialogue with the minister of culture. Many more would have joined had the
place not been blocked by security agents.

In a
one-party communist state that criminalizes opposition, no collective and
public protest of this magnitude was ever attempted or tolerated in Cuba since
the revolution — with the possible exception of a repressed LGBTQ parade last
year.

This
appears to be a wide opposition movement. There are known dissidents (like
“artivist” Tania Bruguera), and a few irreverent but institutional cultural
figures, like film director Fernando Pérez and beloved actor Jorge Perugorría,
who offered support. In between, one finds a whole ecosystem of potential
dissidents, who are not (yet) advocating open confrontation with the so-called
“revolutionary” (in fact conservative) government. Many of them are independent
journalists and bloggers, like Carlos Manuel Alvarez (age 31), who publicly
called for “conversation …  not just with a supporting actor like a
minister,” but directly with President Díaz-Canel.

Unavoidably,
protesters were cheered on by the usual suspects in the U.S. government; no
less predictably, Cuban President Miguel Díaz-Canel called the event an
“imperialist reality show.” Official media called the protesters “mercenaries,”
and even “terrorists”. Two white members of the almost all-white ruling class
(Raúl Castro’s daughter, Mariela, and former Minister of Culture Abel Prieto) indulged
in tropical Trumpism, smearing the mostly poor, brown and black crowd as
“vulgar, tacky and miserable” (Mariela), and “marginals” and “criminals”
(Prieto). Even an occasionally dissonant but mostly official bard of the regime
like singer Silvio Rodríguez, whose songs were actually sung by the protesters,
publicly said that the government was handling this very badly.

All of
this may seem like a footnote compared to massive anti-dictatorial
demonstrations and violent crackdowns in Venezuela and Nicaragua — or even
anti-neoliberal demonstrations in democratic Chile and Peru. Cuba is a
dictatorship, but not one that systematically tortures or opens fire on crowds.
(This may change.) In addition to exporting its opposition (about 20 per cent
of Cubans live abroad), the government secures compliance most effectively with
neighborhood spy networks, public shaming (the infamous “acts of repudiation”)
and incarceration. This toolkit has been in full display in the past two weeks.

This may
just be a moment, an important one, in the awakening of civil society. Cubans
generally toe the line, and know what line not to cross. But the “little
police” in each and every Cuban, as they often call this mechanism of
self-control, is increasingly disrupted by other voices. Social media is a big
factor here, so the Cuban government may crack it down more. But it would be a
mistake. Young Cubans are already fed up, and crave change (or exile). If
artists can connect with them more broadly, this moment may lead to something
bigger.Yvon Grenier is a professor, department of
political science and resident fellow, Mulroney Institute of Government, St.
Francis Xavier University, Antigonish. 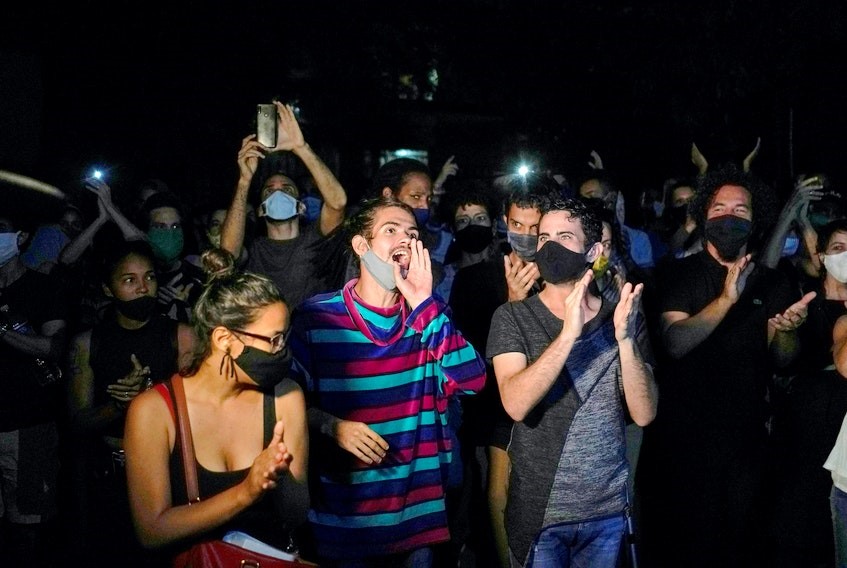