HAVANA (Reuters) – Cubans woke up all last year wondering where they could
find basic goods such as milk, pork, rice, beans, medicine or shampoo. These
days, they also ask themselves: “if I do, what on earth will it
cost?”

Amid widespread shortages, the near-bankrupt, import-dependent country has
increased sales of goods in convertible currencies like the dollar over the
last year, even as it stopped exchanging pesos for those currencies.  That has forced many Cubans to acquire
convertible currencies on the black market where they have surged to as much as
threefold the official rate since the government sharply devalued the peso
https://www.reuters.com/world/americas/explainer-how-cubas-monetary-reform-will-take-place-impact-economy-2020-12-11
in January.

Many goods are simply no longer sold in peso shops despite billions more
pesos now being in circulation.

The result of dollarization, scarcity and devaluation: prices have
skyrocketed and inflation will likely come in at a minimum of 500%, and as much
as 900% this year, according to Pavel Vidal, a former Cuban central bank
economist who teaches at Colombia’s Pontificia Universidad Javeriana Cali.  “Every day becomes much more difficult
because the prices of everything continue to rise,” said Arisleidis
Blanco, who works at a private cafeteria in Havana.

Cuba’s government largely blames U.S. sanctions, which were ratcheted up
under former President Donald Trump, and the coronavirus pandemic that has
ravaged Cuba’s tourism industry, for its economic woes. Some critics say the
main issue is the inefficiency of the state-run economy, despite some
market-style reforms.

The Communist-run state retained its World War Two-style ration card that
offers some highly subsidized goods. It also increased state wages and
pensions, up to five times, when it devalued the peso by around 95% in a bid to
cushion the blow.  But that covers only
some 60% of the population and leaves many Cubans struggling to navigate wildly
fluctuating prices to cover their needs.

“The government used to sell LED light tubes for 30 pesos,” state
bakery employee Ana Rebeca Labrada said. “On the informal market they now
cost 400 to 500 pesos and there are none in the government stores, not even for
convertible currency.”

Cuba’s government says there is no money in the bank to exchange or import
the goods and sell them for pesos which cannot be exchanged outside the country
to buy more.

The economy declined 11 percent last year after years of stagnation and
according to Cuban economists has continued to fall so far in 2021.

Inflation should just be a temporary setback, authorities say, with the
economy due to pick up as the pandemic subsides and reforms yield results. The
devaluation for example aims to boost exports and reduce imports in the medium
term.

That is little solace though for Cubans struggling to shop for basic goods
as COVID-19 cases hit new highs.

Economists like Everleny say the U.S. embargo is real but the government
needs to implement long overdue reforms to boost supply and until then, the
informal market, and with it surging prices, will continue to flourish.

Last week, the state was selling rice only on the ration card for 10 pesos a pound and on the informal market it was 60 pesos, said Havana resident Miriam.  A 50 peso bottle of cooking oil fetched 200 pesos and a pack of hotdogs 80 pesos compared to the 27.50 pesos when available at the stores, she said. Powdered milk was being rationed for children and the elderly at 2.5 pesos a bag and sold for 300 pesos on the street, she said. 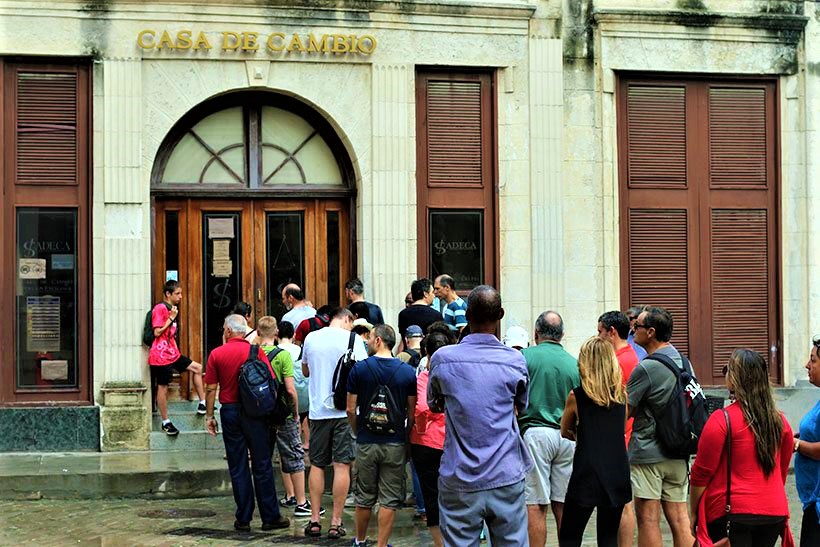