New Book by Vegard Bye, CUBA, FROM FIDEL TO RAÚL AND BEYOND

I have just read Vegard Bye’s Cuba analysis – a bit
late as it was published in mid-2020.  It
is indeed an excellent analysis of Cuba’s current situation and prospects.

This is one of the very best general analyses of the inter-relationships
between Cuba’s economic conundrums and reforms, its socio-economic transformationsand the character and functioning of the political system.  Bye has drawn from his own experience in Cuba
over a number of decades and from a careful and examination of the broad ranges
of literature from within Cuba, from Cuban analysts outside Cuba, and from
Cuban-American and international analysts. His chapters on the economic changes
since the death of Fidel and their social implications is masterful.  Even better is his analysis of Cuba’s
political system in Chapters 4, and 6 to 8.

This volume is a tremendously valuable resource for
a comprehension of Cuba’s current situation and its possible future.

INFORMATION ON THE BOOK:

OVERVIEW FROM THE BACK COVER:

This book analyzes the economic
reforms and political adjustments that took place in Cuba during the era of
Raúl Castro’s leadership and its immediate aftermath, the first year of his
successor, Miguel Díaz-Canel. Faced with economic challenges and a political
crisis of legitimacy now that the Castro brothers are no longer in power, the
Cuban Revolution finds itself at another critical juncture, confronted with the
loss of Latin American allies and a more hostile and implacable US
administration.

“The text that Vegard Bye
presents to us summarizes the ideas and visions that he has been developing
after years of observing closely the evolution of the Cuban social, political
and economic model, especially during the reforms process led by Raul Castro
since 2008. His proposals and analysis have the virtue of not falling into
common places and stereotypes so usual in the Cuba subject. He found
originality from his firsthand knowledge of the Cuban reality, seen from an
international perspective and from the prism of modern concepts of political
science.” (Pavel Vidal Alejandro, Professor of Economics at Pontificia
Universidad Javeriana, Colombia)

“This is
a timely book and a well-informed contribution to the ever-going debate about
Cuba’s future. The author has accumulated decades of experience in assessing
and living in the Cuban reality, and the book offers just that, a scholarly as
much as a personal view of the events in the Island. Whether you share or not
his opinions, this piece will greatly contribute to your knowledge about this
fascinating country, in a way that is both enjoyable and useful.” (Ricardo
Torres, Professor at the Center for the Study of the Cuban Economy, University
of Havana, Cuba)

“Displaying
an expertise gained through several decades of closely watching developments on
the island, Bye delivered a very perceptive and informed analysis of the
economic and political changes in the post-Fidel era, the outcomes of Raúl
Castro’s reform and the political scenarios for the future. A most-needed
assessment of Cuba’s contemporary realities from a political science
perspective.” (Nora Gamez Torres, Cuban-American journalist covering Cuba
and US-Cuban relations for Miami Herald and El Nuevo Herald)

“A timely
and thankfully heterodox volume that gives readers a front row seat and fresh
and locally informed analysis of contemporary Cuban political economy. The
book provides both a sober assessment of Raúl Castro’s 10 years of economic
reforms (2008-2018) and an early analysis of the first year of Miguel
Díaz-Canel’s―Raúl’s hand-picked successor―government. Its unique
perspective derives equally from the author’s immersion in progressive projects
of national renovation in Cuba and Nicaragua as a war correspondent, United
Nations official, and representative of various Norwegian development
agencies. Bye’s ongoing collaboration with various leading Cuban NGOs and
civil society groups gives his book an insider’s insight and balance rare for a
volume by a non-Cuban about such a controversial topic as Cuban politics.” (Ted
A. Henken, Associate Professor of Sociology at Baruch College, City
University of New York, USA)

“A study on Cuba focused on its most pressing issues. A must-read for any researcher―carefully researched and accessible to anyone interested in the past, present and future of the Cuban Revolution.” (Harold Cárdenas, co-founder of the Cuban blog La Jóven Cuba)

VEGARD BYE is
a Norwegian political scientist, writer, consultant and ex-politician. He has
represented the UN High Commissioner for Human
Rights in Angola and Bolivia, written extensively on Latin America, and is
a consultant specializing on human rights, democracy, conflict and
post-conflict societies as well as solar energy. He served as a Substitute
Representative (Vararepresentant) to the Norwegian Parliament
for the Socialist Left Party from Oslo
(1993-1997), meeting in the Standing Committee on Foreign
Affairs.  He is currently
a Partner at Scanteam a.s., an Oslo-based consulting company focusing on international
development and responsible business. 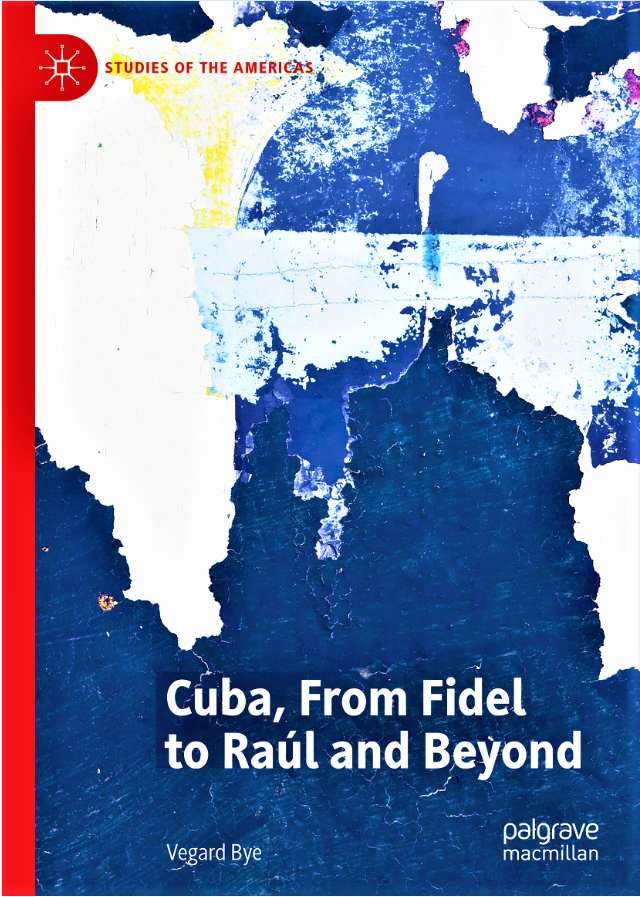